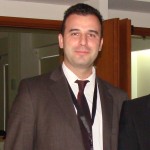 He was born in Nuremberg, Germany, in 1982. He studied Geography at the Social Science School of the University of the Aegean, specializing in GIS. Since then, he has been working in the field of Geoinformatics, developing applications for Local Government, webGIS applications and producing databases with INSPIRE standards. At the present time, he has completed his postgraduate degree in “Quality Assurance”. He has extensive experience in co-funded RTD programs and is a GIS trainer in Local Government Authorities. Since 2009 he has been a member of the Board of Directors. of the Association of Geographers (EGEO).He holds a class A, Class 27 degree. He is one of the founding members of Geosciences and holds the position of Project Manager in geoinformatics projects.

In Geosciences we are aming to provide services, inform the public, promote developments in the field of geoinformatics, provide organizational and entrepreneurial advice, as well as highlight current topical issues related to IT and technology.